Summer is almost over… Besides the fact that a large majority managed to enjoy their vacations and holidays, went travelling abroad, away from the everyday issues encountered in town and forgot, at least for a while, about everything that was bothering them, besides all these people, there is another category of citizens, or let’s say a “segment” of population who tried during summer to spend their time in a “productive and useful” way and eventually got enriched with the help of other people’s properties. We are talking about the increases in number of thefts from the citizens’ homes and the activity of burglars in general, which get intensified during summer. Those who know and realize the effects of this situation, ask their friends/relatives to take care of their apartment/house while they are gone for vacations to the seaside, in the mountains or to the countryside. The most careful citizens prefer to appeal to the services of a security company, therefore, during summer holidays the demand for these services records increases Even if security companies are not watering your plants or don’t look after your pet, , be sure they will insure the integrity of your property.

In this context, Magenta Consulting carried on a study about the brand awareness of security companies among the inhabitants of the urban area. The data obtained from the research made it possible to form the top of the most known security companies, based on the spontaneous brand awareness index. Within Magenta National Screening, the respondents were asked to name independently up to three brands of security companies they know. As a result the following data was obtained regarding the spontaneous brand awareness of security agencies from the Republic of Moldova. The most popular security agency is Justar, which accumulated almost half (49%) of all respondents’ mentions. In top 3 also could be found the security agency Paza de Stat, known by every third participant of the research and Allas – indicated in 20.8% of cases. In top 10 we also find the following agencies:Bercut – 9.5%, Fulger – 6.5%, 6.1% each – agencies Tantal and Legion, Saturn – 5.5%, Media Security – 4.6% and GCC Securitate – 4.4%. At the same time,  the security agency Scut accumulated 4% of mentions, Respect – 3.4%, Delta Force – 1.7% and Prosecutor -1.1%. Among the companies that have less than 1% can be specified: Rozco Grup, Lisnic Grup, Alvin Protect and Cianpu. 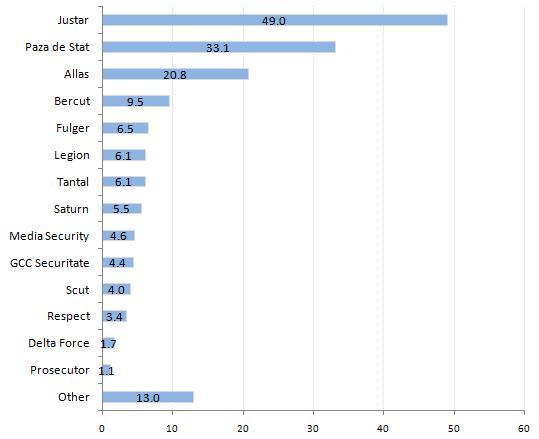 The multicriterial analysis revealed the fact that Justar has greater brand awareness among the speakers of Russian language (+20 p.p.) in comparison with those who speak Romanian. At the same time, Paza de Stat is known in a larger share among the speakers of Romanian language (+20 p.p.) in comparison with the speakers of Russian language, also among those who work for a state company (+16 p.p. over the average) and among the respondents who own a business (+14 p.p. over the average). In terms of income Paza de Stat is more popular among those who have earn 1500-2001 MDL and 3001-4000 MDL per family member.

A possible explanation for the data obtained from the multicriterial analysis and for the security agencies’ brand awareness on certain segments, might be conditioned by the fact that the promovation campaigns of security companies are directed in a higher degree to the Russian language speakers, therefore the messages are advertised mostly in Russian. At the same time, as Paza de Stat is more popular among the speakers of Romanian language, this brand awareness can be connected to the fact that the services of this security agency are mostly requested by state companies, and most of their employees are  Romanian language speakers.

Taking into consideration the fact that the share of security companies’ connoisseurs is larger among Russian speakers than among Romanian speakers, the security companies could change the message they are communicating to the public, the language in which they send the content and to analyze more thoroughly the target-segments to which they address and offer their services. A more efficient and better structured communication will increase the brand awareness among our citizens, which at its turn will increase the income of the security companies.

Certainly, security agencies’ job is very difficult and dangerous, their mission being to remain in the dark, unobserved, in that way contributing to a better quality service rendering. But, as long as they remain less known, it is becoming harder for the agencies to cover larger market shares. Therefore, it turns out that the request for property protection is generally made post factum, once the risk is consumed without being yet covered, for example once the citizens were robbed.

*Methodological remark: the research was carried on a sample of 1400 respondents aged 14-65 years from 24 urban regions (error margin of +/-2, 6%), the respondents mentioning up to three brands of security companies they know.