With milk or dark, aerated or with certain extra ingredients, sweet or bitter, with fruits or with walnuts …in tablets, bars, pralines or in liquid form – all these are diversities of the same product the chocolate. This universal dessert, consumed either on special occasions or during coffee breaks, in front of the TV or in any other place, will definitely recharge our batteries and make us feel better, more energetic and happier. The only issue we have related to chocolate is deciding which one to choose?

The research, conducted by Magenta Consulting on a sample of 1400 respondents from 24 cities and towns, proved that chocolate is consumed by 88% of the urban population in Moldova. Out of all these chocolate consumers, 68% have expressed their preference for a certain brand, while the others said that the brand does not make a difference for them, it just has to be chocolate. It is worth to remark the fact that the consumers of chocolate consider themselves happy in a larger share than do the non-consumers. Therefore, the theory according to which chocolate consumption raises the level of happiness, is also applicable to the Moldavian consumers. 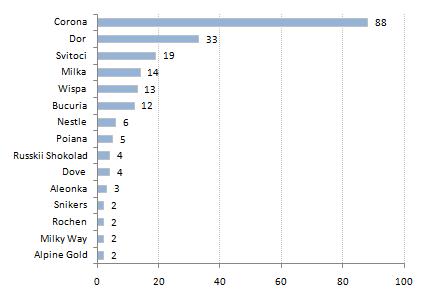 Out of all the brands of chocolate on the Moldavian market,Koronais the best known brand among the local consumers (88%). The local brand of chocolate, Dor, was remembered by 33%, being the second most recognized name. The Ukrainian brandSvitoci is positioned the third, named by 19% of respondents. Also, more than 10% of respondents know about Milka (14%), Wispa (13%) and Bucuria (12%). The main determinant of people’s choice of chocolate is, as always, taste (92%). However, 35% of respondents also try to determine the quality of the product before buying it, while 22% choose the chocolate based on its price.

Fig. 2. Criteria for choosing the chocolate, %

When asked what kind of chocolate they prefer, 45% claimed that they usually chose tablets with nuts, fruit, or other ingredients, while 23% have their heart set on bubble chocolate. Speaking of types of the delicious product, 39% of consumers prefer the milk chocolate and 31% chose the dark kind. However, every 5th respondents said that the type of chocolate is not very important.

Chocolate is so deliciously tasty and diverse, that finding someone not to like it at all is somewhat of an impossible mission. But, as tasty as it is, Moldovans are not so big on sweets. We eat chocolate on average 6.1 times per month, but taking into consideration that the frequency of purchase is even lower (5.7), we are happy to state that our nation is not abusing the tasty delight.

The frequency of chocolate consumption is higher among women (6.4 times per month) and teenagers (7.9 times), and therefore among pupils/students (7.8 times). Analyzed from the perspective of the education level completed, chocolate consumers are more often middle school graduates (7.1). Also, the highest level of consumption is registered among the respondents with an income over 9000 MDL (8.1 times per month). Most frequently, chocolate is bought from the supermarket, together with other groceries (44%), either from the neighborhood store (46%), on our way home.

In result, even though chocolate is a product consumed by the large majority of the urban population, this product is consumed with moderation.  Most consumers have their chocolate preferences well-defined already, and the choice of the chocolate mainly based on its taste is dictated by the individuality of each consumer.