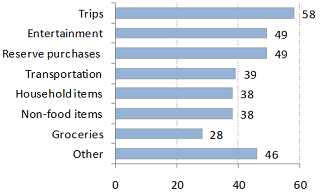 In strong relation to the economic crisis that has hit our country, and also correlating to the number of returned emigrants and the decrease in remittances’ value, Moldovans are foretelling a series of expenditure cuts. Obviously, these reductions reflect their vital priorities and therefore include the following:

Groceries will be the least affected by the cuts in the personal budget, on average down by 28%. If breaking down the reductions based on various categories of respondents, the following situation is presented: budget cuts of 33% on groceries for those earning less than 500 MDL per month, while those earning over 1500 MDL shall reduce their spending on food items on average by 21%. Most of those who intend to cut back on their budget represent people who graduated either the general or vocational schools. The marital status analysis reveals that least economies will make the single people (28%), as compared to the widowed (41%) or the married ones (32%). This situation is explained by the fact that the latter are in a position to assume additional financial responsibility for several family members in terms of purchases. Another interesting difference is that those intending to leave the country shall save more on food items (28-30%), as compared to the ones that don’t intend to leave (25%).

First of all, the main cut in expenditures will hit the travelling expenses, on average down by 58%. The largest savings will be done by the widowed and divorced respondents, reducing the costs by 75-78%. In comparison to the people whose income does not exceed 500 MDL per family (which save up to 62%), the respondents with income over 1500 MDL will save for this category of expenditures - up to 51%.

The second position in personal budget cuts includes the entertainment, a cut on average by49%. This category will be again reduced at most by those widowed and divorced (67-68%). Those single and in concubinage will diminish the entertainment component of their budget the least, on average by 34-35%.

The list of savings includes on the third position the products bought as reserves, which are down by 49% from the budget. The top savers tend to be the respondents who earn less than 500 MDL per month, those widowed and divorced, cutting down on such categories of expenses 56-57%. On the other side, those earning over 1500 MDL per family member will be the least saving on this element of their budget.

On average, savings of 38% will be made for non-food products and household items. The highest cuts will be again done by those with less than 500 MDL per family member – 45-46%. The divorced and widowed respondents also intend to minimize their expenses by 41-52%.

Transportation and other expenditures will be downsized by 39%.

The limited possibilities of Moldovans affect not only their expenditures’ volume, but also their sanity level, situation which enhances their desire to emigrate. The regression analysis revealed that the level of education, income and employment possibilities determine only up to 6% the self-esteem. The sense of personal competence has a significant impact on revealing personal initiatives, and the confidence in success. The same factors above mentioned (education, income, employment) favor the development of planning abilities only up to 2%. The capacity of respondents to plan conveys them the feeling of control, otherwise its lack is often associated to an increased level of stress, or, in the best case, to an increased level of apathy.