Every year, the population of Republic of Moldova aged 0-15 years decreases on average with 1800 persons a year (according to the data provided by the NBS). Based on these statistics, the local producers of ice-cream should worry, because their most loyal consumers – children are becoming less each year. This gradual ”disappearance” of the little consumers will force the local producers in way to offer new ice-cream products, in order to attract also the adults who have a sweet tooth.

We wanted to find out which brands of ice-cream are the most preferred by the consumers and what determines them to purchase and consume this product. Therefore, Magenta Consulting carried out a study to determine the ice-cream brand awareness and the factors that influence the purchase decision. The data was collected from 1400 respondents aged over 15 years from 24 urban centers of the country.

Loyalty toward the brand

We are in the middle of summer, and the hot weather makes us slow down near the ice-cream booths. And now the following questions arise: what do we generally buy and how conscious does the purchasing process devolve? Therefore the first question that required a response was how well the local consumers know the ice-cream brands and how loyal are they towards the chosen brand. The results indicate that 52% of respondents have a preferred ice-cream brand, other 39% do not have a certain preference, while 9% or the interviewed people don’t consume this product at all.

The multicriterial analysis pointed out on one hand that the consumers with the lowest level of loyalty toward an ice-cream brand are those aged over 45 years (44%), who in most cases don’t care about the brand. This can be explained by the fact that those who spent their childhood in the soviet period had definitely fewer choices to choose from, following the principle “we buy what it is being sold”. On the other hand, a new segment of consumers is fast developing – the teenagers aged between 14 and 19 years, which are the most loyal consumers toward a brand (64%). At the same time, it was recorded that women are more loyal to a certain ice-cream brand (59%).

It is interesting to find out why half of the ice-cream consumers  chose certain brands?

The research revealed that people mainly base their choices on the taste of the product (89%) and then on the price (42%). The variety of products was mentioned as a decisive factor in the choice of ice-cream by 35% of the respondents, meanwhile 32% of the interviewed people fundament their choice on the quality. A very interesting thing pointed out by this research was the fact that advertising and packaging have a very small weight in consumers’ choice of ice-cream (respectively 9% and 4%), despite the great efforts of producers’ marketing teams. 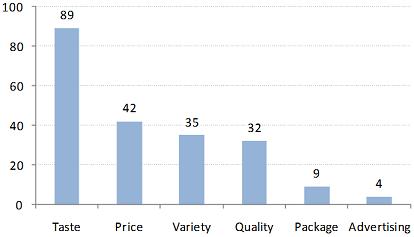 Why Moldavian consumers do not react to the advertising of ice-cream? Generally consumers consider they are not influenced in any way by advertising, it influences only at the level of subconscious. Nevertheless, there could be mentioned also additional reasons, like the quality of advertising and how well it is targeted to different groups depending on age and income. Teenagers, the most active consumers after children, are expecting more ingenious advertising solutions due to the fact that they grew up in an environment where different brands are waging a fierce battle to attract consumers’ attention.

Each market has its own stars, so we tried to find out which brands of ice-cream are the most popular among Moldavian consumers’ preferences. The method of non-assisted questionnaire was applied in order to analyze the brand awareness, i.e. respondents were given space to write by themselves the brands they know, instead of choosing from a list of proposed brands. Unfortunately it is to mention that our consumer is very confused about the local brands of ice-cream, as there is no difference made between ice-cream brands, producers and types. As a result,  “Plombir” was mentioned in 47% of the answers, “Eskimo” in 32%, while “Sandriliona” and “Drancor” were mentioned by 30% and 29% respectively. Among other mentions can be stated ”Joc”, ”Frigo”, ”Amir”, ”JLC”, ”Moldova”, ”Incomlac”, ”Sandra” and others. 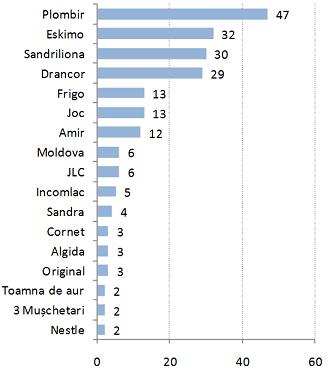 This phenomenon may be the result of an incorrectly offered information to the public, becoming confusing when talking about ice-cream brands. A suggestive confirmation could serve the example of “Plombir” and “Eskimo”, mentioned by the most of respondents in both categories of ice-cream types and ice-cream brands. Local producers seem to save money not investing in promotion and positioning, just following consumers’ habits rooted from the period of planned economy.

Ice cream is sold in a wide range of forms and packages, but consumers’ preferences are mainly divided. 44% of the respondents mentioned they prefer to buy cone or cup ice-cream, this might be explained by the nostalgia for “the old times” ice cream. Other 26% of the respondents choose the ice-cream sold per kilogram. Lately was registered a trend among consumers in choosing family pack ice cream size, in order to save money during the crisis period on one hand, and to have the possibility to enjoy the dessert with the whole family, on the other hand. The rest 20% of respondents prefer the ice-cream packed in foil and 9% the one packed in plastic boxes.

Figure 4. Consumers’ preferences towards forms and packages of ice-cream (%), N=1223

The great majority of the consumers (65%) declared they prefer to buy ice-cream from the shops in their neighborhood, 30% buy it from supermarkets, 2% from Cash & Carry stores, and for other 3% the place of ice cream purchase has no significance..

Which is the advantage of the neighborhood shops compared to other ice-cream points of sale?The vicinity to the shop has a great importance. This factor highlights the spontaneous character of the decision for purchasing ice cream. At the same time, the neighborhood shops have the advantage of placing the ice cream fridges outside, in this way attracting the passers–by.

There are few food products that bring consumers such emotions as the ice cream does. Ice-cream consumers are happy people when they enjoy this dessert, and its purchasing decision resembles, most of the times, to a moment of revelation. What is left for us to do, is to wait for the local producers to study the expectations of consumers, offering in return delicious products and new emotions when buying them.