The development of informational technologies and the continuous increase in the number of internet users, as well as employees’ lack of time due to the continuous rush for higher paychecks, all these factors and many other, are forcing the transfer of most daily activities to the virtual world. Therefore, anyone can go shopping without even leaving the coach from the dining room or the office desk, simply by clicking the computer mouse. At international level, online shopping became an ordinary thing due to the advantages provided by the virtual stores.

Magenta Consulting carried on a study which revealed the specifics of on-line store usage among the inhabitants of the Republic of Moldova. The data was collected via Magenta National Screening study, on a sample of 1400 respondents, from 24 localities of the country.

Thus, it was revealed that from all the respondents, only 8% made on-line purchases, while the percentage of those who actually trust this kind of stores is somewhat higher - 14%. Although these numbers are not so impressive, the level of people’s trust into these services actually exceeds the usage level, leaving place for a potential increase. Nevertheless, the discrepancy reveals the existence of objective factors that create obstacles for on-line shopping.

The multicriterial analysis reveals that the services of online stores are mostly used by those aged 20-24 years, of which by 12% or by 4 p.p. over the general sample. Those who the least resort to on-line shopping are aged 30-34 years and constitute 3%, i.e. 5 p.p. lower than the general sample. On the other hand, the most frequent users of these services are the following categories: the entrepreneurs – 13% (+9 p.p.), those with monthly income over 9 ths. MDL (19% or +8 p.p.) and those with 5-7 ths. MDL (12% or +4 p.p.). Also, in this list are included the respondents with graduate level of finished education (14% or +6 p.p.). Depending on gender, spoken language and area of living, there haven’t been registered any significant deviations in terms of on-line shopping usage.

Referring to the trust level toward on-line stores, the highest values were registered among those aged 20-24 and those over 45 years, among Romanian language speakers, men, and mainly those living in the central area of the country (16% or +2 p.p.). Based on the occupation of respondents, it was revealed that those employed at private companies and the entrepreneurs registered the highest trust values (respectively 16% or +2 p.p. and 17% or +3 p.p.). Based on their monthly income, most trustful into the virtual shopping tend to be the respondents who earn over 7 ths. MDL per month (17% or +3 p.p.), while in terms of education, those with graduate studies.

The most often bought products via on-line shopping resulted to be the souvenirs and the gifts, mentioned by 47% of the interviewed. However, every fourth respondent would purchase on-line also electronics or groceries, while 22% prefer buying among others: books and clothing. 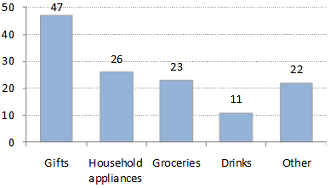 Considering the above presented data, it can be concluded that the usage level of on-line shopping is at a rather low level, though with a positive tendency of growth, due to the rather high trustworthiness indicated by respondents. However, these low figures could be explained either by the decreased level of awareness of virtual shopping, or by the fact that Moldovans can afford the luxury of going shopping.