As the legendary American advertising director, William Bernbach used to say  “in advertising, not to be different is virtual suicide”. Since the ancient times, people felt the need to share some information about the issues that concerned them, either using engravings or drawings. Today, the advertising phenomenon is changing very often, and the advertisers have to make use of all the advertising channels that exist in order to reach the ear (and the heart) of the consumer.

This short article shall identify the Moldovan consumers’ attitude towards advertising mediums. The data was collected during the Magenta National Screening quarterly research, on a sample of 1400 respondents in 24 cities of Moldova.

If comparing these data with the data recorded within the researchcarried out in November 2009, it is to say that consumers’ attitude has slightly changed in favor of promotions and sales (60% gained during the latest study), while tastings have accumulated 50% of customers’ preferences. 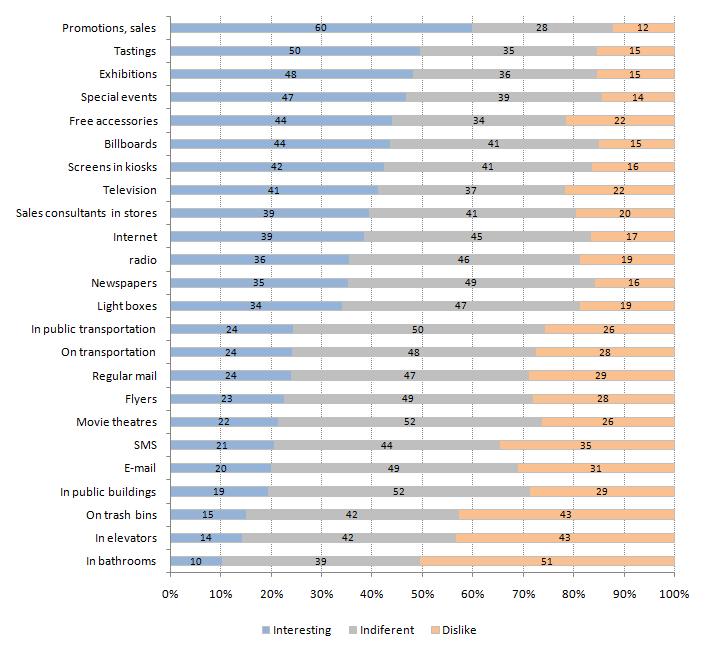 The „ad-fight” is carried out on all possible battlefields, the agencies therefore are trying to invent ever more  ingenious placement solutions. Thus, each of these solutions can be considered creative. As the study shows, respondents are bothered the most by the advertisements in public bathrooms (51%), elevators (43%) and the ones placed on trash bins (43%). It is of no wonder that these public places, usually unclean and unpleasant, let the consumer associate his bad impressions of that specific place with the advertised product. Needless to say, this association is not in the best interest for the company’s image.

While some advertisements bother the consumers, other leave them indifferent. The channels towards which our consumers are mostly indifferent are the movie theatres (52%), ads in public institutions (52%) and in public transportation (50%). As we mentioned before, this is mostly a positive sign, because these are the consumers that can be attracted. Nevertheless, it requires the mastery of an advertising agency which would implement the idea.

Lately, a very often discussed subject among local marketers has become internet advertising. If in the last quarter of 2009, 31% of respondents answered that internet ads present interesting to them,  6 months later now, the share of those interested increased to 39%. At the same time, we spot an increase in consumers’ preference towards TV advertising (41%, in comparison with 34% in November 2009), women being slightly more attentive towards these TV ads.

Is this a sign that the Moldavian consumer becomes more pretentious towards the quality of advertisement? And is this is true, how will the local marketers react to this?