Last year, in 2016, the National Employment Agency created a rating of top 10 most requested professions. Thus, employers in the Republic of Moldova are mostly in search of tailors, auxiliary workers, confectioners, salesclerks, knitters, doctors, PC operators, accountants, and drivers. From this point of view, the data concerning young people’s options offer the possibility of forecasting ahead of time the professional niches that will be more required in the future.

About 49% of the respondents are uncertain about the wanted job. At the same time, 45% of the respondents know exactly the job they want and the company they would like to work at. The people who study and work at the same time are more certain about the job they want and the company they wish to work for than those who only study. This is a confirmation of the fact that practice provides a clearer vision of the responsibilities involved in a certain profession. 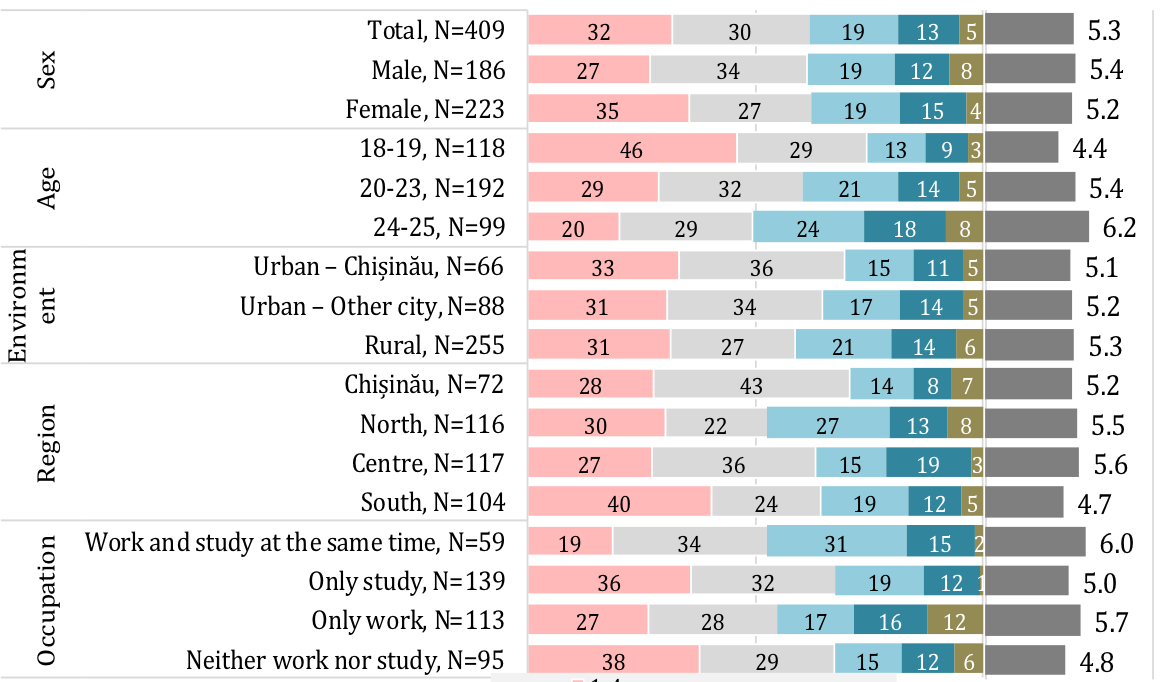 The future of the Republic of Moldova looks rather optimistic. Young people nowadays continue to opt for qualified jobs which require higher education. At the same time, it can be noticed that they are directed towards jobs which are popular at an international level and thus can be easily practiced abroad. Most of the young people who have made up their minds about the desired profession plan to work in fields linked to the most popular department - economics. Thus, 13% of the young people who were included in this category pointed at one of the following fields: accounting (mentioned most often), economic sciences in general, finance, marketing, and business administration. 10% specified medicine. 9% indicated fields related to engineering and technology, 6% - constructions, also 6% - IT and law, 5% - public order, 5% - education and also 5% plan to work as cooks. At the same time 3% of the respondents are ready to satisfy the high request of tailors stated by the National Employment Agency.

The choice of the profession we want to practice is most often linked to the level of our readiness to accept something new. The more conservative people will choose professions which can secure an income and which have withstood the test of time, such as lawyer or doctor. The most non-conformist people will choose professions which involve a certain amount of risk when it comes to salary scales and stability. Thus, among the jobs listed by the respondents, with a share of 0.7% are included the creative professions, such as designer, photographer, guide, artist or actor and even conductor.

Methodology: The study’s results are representative at national level, among the population aged 18 - 25, with a margin of sampling error of +/- 4.8%, at a level of reliability of 95%. The survey was conducted on a multistage stratified probability sample of 409 respondents. The data was collected between 9 and 18 July, 2017, via telephone, using CATI (Computer Assisted Telephone Interviewing) method.