Starting with the footwear made out of wood bark, with the help of nails,  papyrus, timber, or starting from peasants’ sandals knotted with vines; nowadays the industry of footwear has evolved to more advanced technologies. Today you can find a great variety of colors, shapes and sizes, sandals, moccasins, shoes, high-heel shoes, boots, slippers and sportswear and so forth.

The properly chosen pair of shoes can be the salt and pepper for your outfit. What you wear on your feet, not only secures the protection and comfort of the walk, but also reveals your personality.  Women have the capacity to appreciate a man in 45 seconds, including based on how well he matched the shoes with his costume.

Researching the profile of the local consumer, Magenta Consulting elaborated a study about consumers’  footwear buying habits and preferences, which specialized shoe stores they prefer, where do they generally buy shoes and which are the criteria to follow when purchasing a pair of shoes. The data was collected on a sample of 1400 respondents aged 15-65 years, from 24 towns, with an error margin of +/-2,6%.

In order to find out what are the most popular shoe stores in the Republic of Moldova, the respondents had the possibility to name 3 of them. As a result, most of the urban population knows the stores of Zorile (71%) and Cristina (50%), 15% of them mentioned Salamander, 10% - Sandalini, 8% - Adidas, 7% - Leonardo, 6% - Tighina, 5% - Floare. Puma, Medea, Ionel, Covalli and Nike were named by 3% of respondents each, and 1% of study participants recalled the names of the following: Unic, Ecco, Gemeni, Tiras, Reebok, Market and Jumbo. 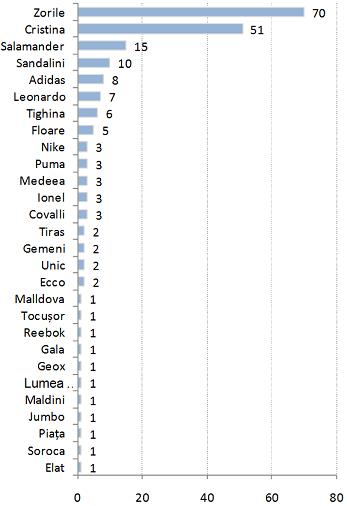 Even if there were named a large variety of shoe stores, more than half respondents (55%) prefer to buy their shoes at the local market, 15% from malls, 11% from specialized shops and another 11% from brand stores. Those who like to buy their footwear from abroad cover a share of 6%. Among the respondents, could also be found such people that prefer to make custom shoes, representing 1% of all interviewed.

Picture 2: The preferred points of sales for buying footwear, N=1299, % The multicriterial analysis pointed out that those who prefer to buy shoes from the market are mostly persons over 45 years, with monthly income less than 2000 MDL per family member. Shopping malls are visited in a larger share by the people aged 20-34 years with monthly income higher than 3000 MDL per family member. Those who buy their footwear from abroad are mainly aged 14-19 and 25-29 years. These categories purchase their shoes when they go abroad as tourists or for temporary studies/work, or they might receive parcels from their relatives from abroad, knowing that it’s much more convenient to complete your wardrobe from outside the country.

While selecting the point of sales for purchasing shoes, the study participants mainly consider the price (53%), quality (47%) and the existing diversity of shoe models (40%) – these three being the determinant factors in making the final purchase. The quality of services rendered, close location of the store to the house and the famous brand are less important for buyers for making the purchasing decision, as these factors were mentioned by 8% each. 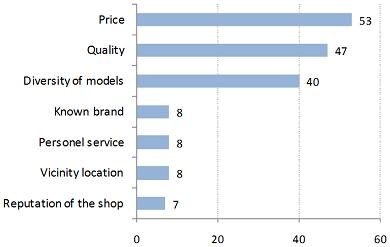 When choosing their footwear, almost three quarters of the urban population takes into consideration its commodity, 59% - the price and 37% - its design. Every fifth respondent follows the trends of fashion and examines a new pair of shoes in compliance with his entire wardrobe. Only 5% of respondents would necessarily want to buy a pair of famous brand shoes.

The multicriterial analysis revealed that commodity is one of the most important factors for selecting a pair of shoes for those of 25-29 years and for those older than 35 years. At the same time, price is considered significant in a larger share by those who are over 45 years. Design and fashion trends are taken into account in a larger share by young people aged less than 29 and by those with incomes over 6000 MDL.

In conclusion can be said that the local producer is generally known among the study participants. Besides, even if in the last years several specialized shoe stores have been opened, people nevertheless tend to purchase their shoes from the market.