During the Magenta National Screening research were studied the needs of the Moldavians.* As a point of reference was taken the Pyramid of Maslow which represents the hierarchy of human needs in the order of their satisfaction priority. 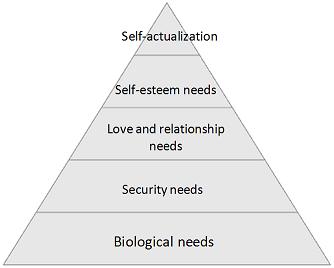 Figure 2: The pyramid of the Moldavians’ Needs 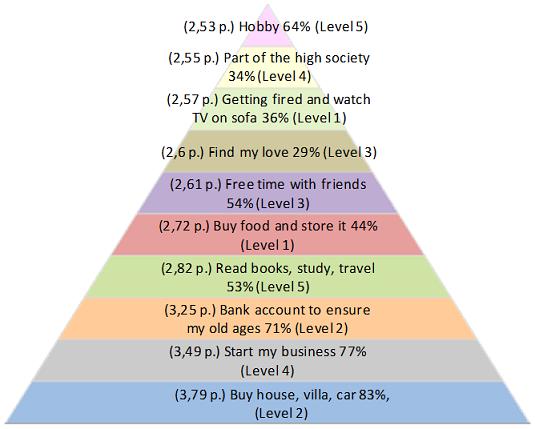 The top of the Moldavian needs was elaborated taking into consideration two aspects: the qualitative one that meant estimating the importance of each need on a scale from 1 to 5, and the quantitative one that counted the number of persons who pointed out each need. The needs mentioned most often by the respondents, not taking into consideration the score, in case they would receive 500,000 Euro are: buying a car, a house, an apartment; starting a business, ensuring their retirement age by opening a bank account and granting time to the favorite hobbies. Even though the first three needs gathered also the largest score, by 3.79, 3.49 and 3.25 points, the fourth need got situated on the last position with only 2.53 points. Even though many Moldovans would like to have more time for self-realization, they are conscious that this would be possible only at last, after all other necessities will be satisfied, which are more important, referring to the first four levels from the pyramid of Maslow: physiological needs, security needs, needs of belonging and esteem.

At the same time, the Moldavian hierarchy of needs differs from that of Maslow, the basic needs being interpolated with the needs from the superior levels.

At the base of the “Moldavian pyramid of needs” is situated the necessity to ensure a roof above the head (corresponding to the second level in the Maslow’s pyramid), being chosen by 83% from participants in the research. Is it so that the housing problem is the most acute problem of the large majority of population?

Neglecting the basic needs, the Moldavians aspire to demonstrate how good they are as entrepreneurs. If they received 500,000 Euro over night, 77% of them would start their own business and maybe become successful entrepreneurs (this need corresponds to the level 4 in Maslow’s pyramid). 71% of the respondents would open a bank account (this need corresponds to the second level - security need), fact that would allow them to have a decent life till the end of their life. This situation reveals the uncertainty of the society in the future.

On the forth place in the priority order of needs’ satisfaction, 53% from the respondents oriented to self-realization (necessity of the 5th level), would spend their time on studying, traveling and reading books. Otherwise said, Moldavians do not forget about enlarging their stocks of knowledge even when they decide to invest money in building their house.

On the 7th place of priorities is situated the possibility of finding the love of their life (level 3), but this need was mentioned by the fewest percentage of respondents (29%).

On the 8th place, Moldavians having 500,000 Euro, would leave their jobs and stay all day long on the sofa (level 1). 36% of respondents would proceed in this way. The necessity to rest, which was indicated in a lower degree and therefore given low importance, makes us think that we don’t like the jobs we have or that we don’t work at all.

It can be concluded that the inhabitants of cities have higher aspirations and desires: to become influential businessmen, to develop as personalities, to spend time with the loved ones and to dedicate more time to their hobbies. Unfortunately, the physiological and security needs aren’t satisfied to that sufficient extent that would allow Moldavians to think about their higher aspirations of self-development.

At the same time, it is gratifying the fact that the Moldavian society is an ambitious, persistent one, prepared to withstand the hardships and the problems occurring every day. At first sight it seems that 500,000 Euro is a lot of money and that they will be enough for everything, and it’s true, mainly being influenced by the answers of the respondents.

*Methodological remark: the research was carried on a sample of 1400 respondents aged 14-65 years from 24 towns (error margin of +/-2, 6%). Each respondent was asked to choose 5 most important needs that he would satisfy if he had 500,000 Euro and to give to each of them a score from 1 to 5 according to their importance.