If in one family reigns peace and understanding, that means that there are at least 2 TVs and 2 computers in the house.  That is what people say, and it is not far from the truth.  Since it incorporates all - TV, books, magazines and newspapers, source of information, means of bringing closer the loved ones who have gone abroad , means to find that one true love, to make and promote business, to work from any corner of the world without being in an office, to make shopping that would otherwise be inaccessible in our country or to obtain access to different services at any hour - the computer has become the  „magic box" that can turn even the most extraordinary dream into reality.

As individuals, we build a part of our personal lives around the Internet and computers as such, while governments do the same with their strategies and public policies for development. But how many of us actually know about E-governance which is fully running in Moldova? The Government asked itself about it, after which, Magenta Consulting in cooperation with The Public Policy Institute have found more about the matter through the study "Perception, use and support of the population for the transformation of e-governance in the Republic of Moldova".

The times are changing, so do meanings. An honorable householder in Moldova is not considered to be one without a house, car, LCD TV and ...computer.  The share of households that have at least one computer connected to the Internet is 53%. Some have even up to 4 computers.  On average, however, there are 1.1 computers to each household.

The primacy is held by those respondents who are living in the city, have higher education and more money at their disposal. The highest average number of computers per household was recorded in the case of those who had an income of over 6000 MDL. They access the Internet at least once a day and spend at least 2-3 hours on the computer.

Computer is an interesting "toy" though for youngsters. Usually the same pupils and students are those who do not have money to buy one. This is the main reason why 70% of respondents with age ranging from 16-25 don't have a computer.  The options that they use to obtain access to the Internet are friends and acquaintances, library and Internet cafes.

They use it mainly for Skype, odnoklasniki and facebook.  Otherwise, how would they know about what have been up to and where are now their former classmates, neighbors and acquaintances? Then, they use it to download movies, series whose end they no longer have the patience to watch it on TV, music, books, and for entertainment. Who never tried online games at least once? 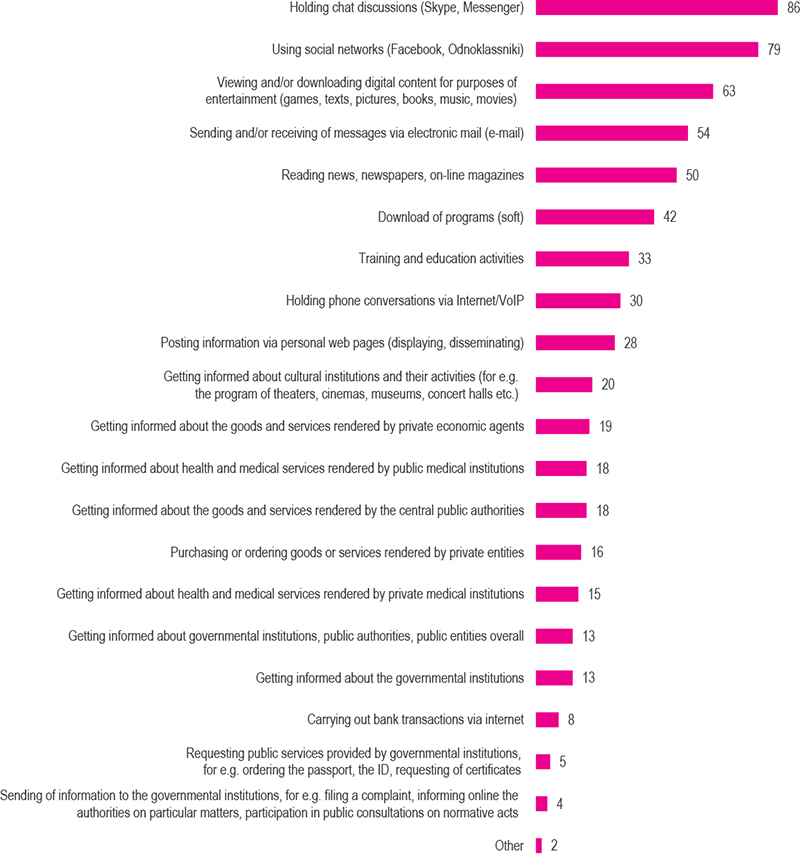 % of the total number of respondents

The most common way of connecting the rural households to the Internet are those of type ADSL (47%) and 3G (15%).  The speed ​​of optical fiber (27%) is available for now, only to those in urban areas.

Youngsters, townspeople with higher education and higher incomes, are those who know more about e-governance, who appreciate its benefits, visit the websites of public institutions, trust and use online public services.

Most Moldavians are interested in the weather condition, education, health and justice matters. The most visited government websites are those of the State Hydrometeorological Service/ SHS (30% of people who have accessed any of the government agencies' websites), followed by the website of the Ministry of Education (29%), that of the Ministry of Health (22%) and the Ministry of Justice (22%).

Interest drops dramatically, however, when it comes to the information from the Government's website. About 10% of respondents indicated that over the past 12 months they have accessed   www.gov.md at least once.  Men are more passionate about "Politics" (12%), but women are not that far behind either (8%).

When it comes to the use of online public services though, people from villages declare themselves to be rather skeptical. Firstly, because they do not trust that they will obtain the service with certainty. Secondly, they are questioning their safety conditions; thus, preferring to make an additional road to the capital, to wait in line, but to come back with a verbal or written response received in person.

Administrative officials have the highest degree of confidence in the quality of online services, in 45% of their cases, its estimates are valued at the maximum value of 5 or 6 points.

Although townspeople desire for public services online may be indeed great, the use is low. 33% out of all respondents say they want to use them. In fact, only 5% have used such services at least once and this was done more to check documents. Most people have used the service of the State Tax Inspectorate (30%) for checking invoices, followed by the service of the Ministry of Education - for verification of the education act (25%) and of IS Register - to verify the personal data (23%). 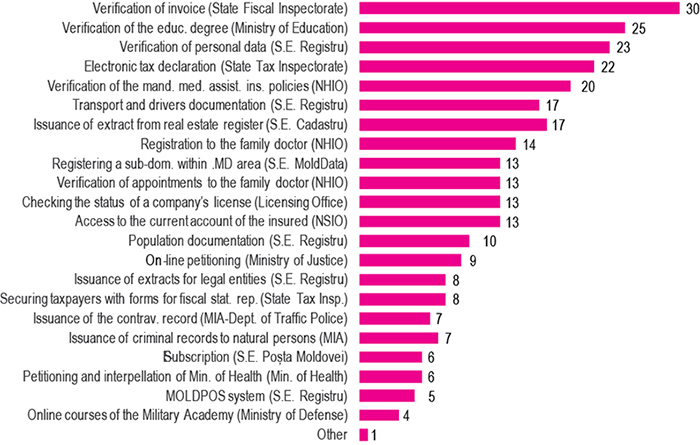 Even if we know, let's review. Especially since most of those 3,000 respondents across the whole country have indicated that they do not know the advantages of E-governance: time saving, easy access at any time and distance to information and public services, fewer queues and corruption and, finally, development and money saving. All that remains is to follow the motto "a computer in every home and as many secure online services as possible."

Sociological study "Perception, use and support of the population for the transformation of e-governance in the Republic of Moldova" was conducted on a sample of 3,000 respondents. The survey is representative at the national level, with a margin of error of ± 1.7% at a confidence interval of 95%.