On one hand, there are the young people who manage to do everything - they study and work at the same time, and on the other hand, there are those who don’t manage to do anything - the young people who state that they neither study nor work. So who are the latter ones - some lazy youth who don’t care about anything, or just some disappointed youth who are not confident about their own strengths. Let’s find out. 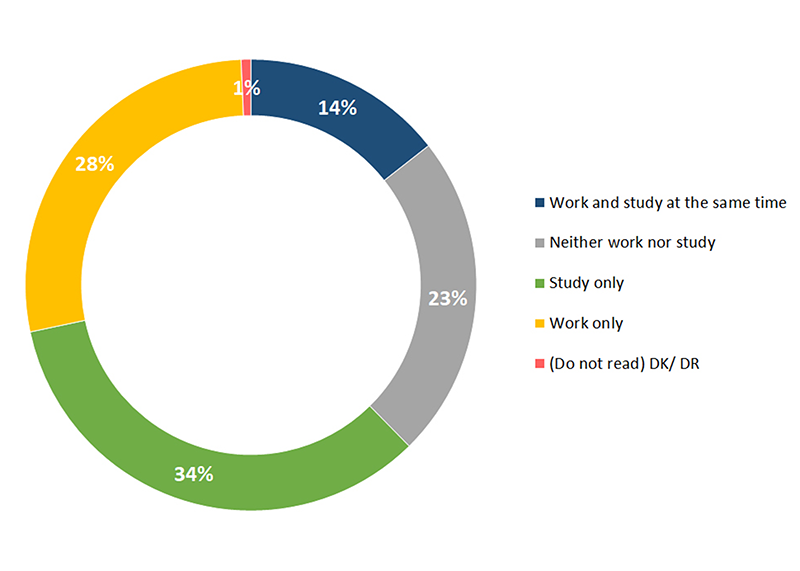 So what do the ones who are not engaged in any occupation really do?

It is interesting that girls namely have that significant share in the category of youth who neither study nor work. One quarter of those who neither work nor study are women on maternity leave. Every second one stated he/she was unemployed. 67% of the young people who neither study nor work come from rural areas, and only few of them come from Chisinau (8% against 13-32% in the case of the youth engaged in a certain occupation). This can be an indicator of the fact that either the rhythm of life in the capital drives every one into some activity, or it is easier to get a job in the capital.

The profile of the youth depending on their occupation and residency area, %

It is interesting that even though many of the young people who declared themselves unemployed live in villages, none of them mentioned they were “farmers on their individual farms“. Could the reason behind this be the wish to find a job according to the profession, or are we talking about the lack of interest among young people from villages in working on their own land?

It is sad that a share bigger than the average of the unemployed youth are people with professional studies (22% against 10% for our entire sample). Perhaps a professional education diploma in the rural area requires you either to set up your own business, or to commute daily to a different area where you would have the chance of practicing the acquired profession according to the diploma.

A young person’s job depending on the completed education level

For those who are concerned about the young generation, we announce that the youth who neither work nor study do not belong to the “golden youth” category who only know how to have fun. In fact, these young people are less active than the general sample. In what concerns the life style, they are rather passive: they seldom go to restaurants, beer houses, cafes and cake shops, compared to the other young people; they rarely eat in fast food restaurants and they don’t spend money in karaoke bars or casinos. It would be genuinely complicated to actually find such entertainment in villages.

If they can’t find a job here, they then want to travel abroad.

Another concern could originate from these young people’s intention of leaving the country in case they don’t find a job here. It has actually been noted that a higher rate compared to the level of the entire sample of young people plan to study abroad - 15%, and a even higher rate of 23% (though it does not go beyond the average per sample) intend to work abroad. It is worth mentioning, however, the tendency in the case of another segment: 36% of the young graduates who are working at the moment plan to study abroad.

The profile of the youth according to their occupation and intention to emigrate on a temporary or on a permanent basis, %

Who are the active “go-getter” youth?

Since we have already spoken about the unemployed youth, let us now see what makes those who combine studying with working cope with everything. First of all, one third of these young people are residents from the capital (against 16% as per entire sample). As expected, these young people who hold high school diplomas are studying at university at the moment (57% against 26% as per entire sample).

Most of the young people who combine studying with working do it for the sake of money: only 75% plan to work according to their diplomas while at the moment they are engaged in jobs that have nothing to do with their areas of studying. It is good to note the fact that the percentage of those disappointed about their education among these young people is low: only 2% don’t even plan to work according to their diplomas (while among the unemployed young people this percentage rises to 14%).

The rating of the top fields of study chosen by the young people who combine studying with working, % 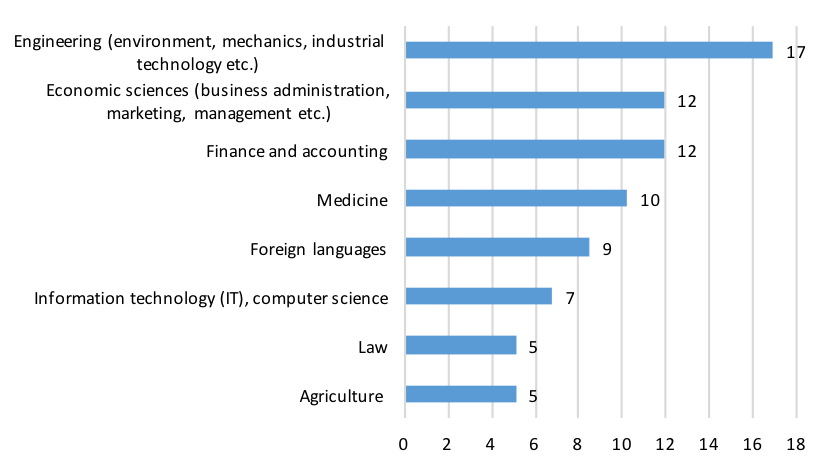 *This rating includes only the fields that got 5% and above.

Conclusions for the HR managers:

In our next article you will find out about how well young people know where they would like to work. We invite you to read our publications every Tuesday!

Methodology:The study’s results are representative at national level among the population aged 18 - 25, with a margin of sampling error of +/- 4.8%,at a level of reliability of95%. The survey was conducted on a multistage stratified probability sample of 409 respondents.The data was collected between 9 and 18 July, 2017, via telephone, using CATI (Computer Assisted Telephone Interviewing) method.