“Job” is the word that could provoke joy, sadness, irascibility, contentment, hope and desperation. It depends on the context this word is used in. The places combining the best this palette of emotions are Career Fairs. At one of them, the most recent, was also present the Magenta Consulting team with prepared questions.

First of all, we asked those present at the Fair if they were employed or jobless: 64% answered they were employed at the time, the rest; over a third of visitors claimed they already had a job. Among visitors who were already employed there were many Russian speakers, university graduates and those who work in private companies. Among the jobless visitors were school students, university students and over 2/3 of Romanian speakers. 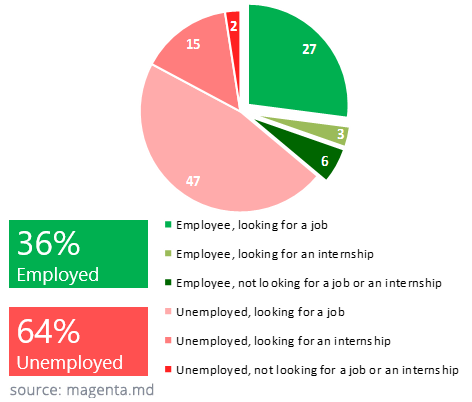 However, among the unemployed there were also many persons with work experience. If 46% of them never changed their job, 18% and 15% had done it twice and, respectively three times already. For those employed, the figures are even higher: each 20% of the employed respondents changed their job twice or three times.

86% of respondents analyze several job offers, after which they choose the most suitable to their expectations

Being asked about the expectations they have from the job being searched, the respondents answered the important aspects for their professional activity. From the answers with the highest popularity we created the ideal job “description”. Thus, an ideal job must be in the Republic of Moldova, more exactly in Chisinau, closer to home, in the private sector and in an international company. The work schedule must be full time and with a flexible regime, but with a fixed monthly salary, in the studied domain, and the relations with work colleagues must be pleasant.

Expectations from the job, %

It is curious that men more than women and those who are still attending university (especially the students of the Moldova State University) are willing to work more than 8 hours a day. On the other hand, we were curious about the factors which would motivate the Fair visitors to resign. The favorite answer or reason for resigning was a higher salary in a similar position within another company.

One of two respondents recognized that he/she would give up his/her job if the possibility for professional growth would be lacking. For 46%, a serious reason for resigning is represented by the failure to maintain safety and security at work. Other 31% would give up due to monotony, 30% would not bear tense relationships with the superiors, 28% would run away from stress and 15% from unfriendly colleagues.

We got to the top of the most sought domains by potential employees, promised at the beginning of this study. As you can see in the IT domain there are not only specialists sought by companies, but also the vice versa – the most interested specialists in changing their job or, in general, to obtain one are programmers. The next three positions are related to sales, strategies and communication – even here they do not separate from each other. 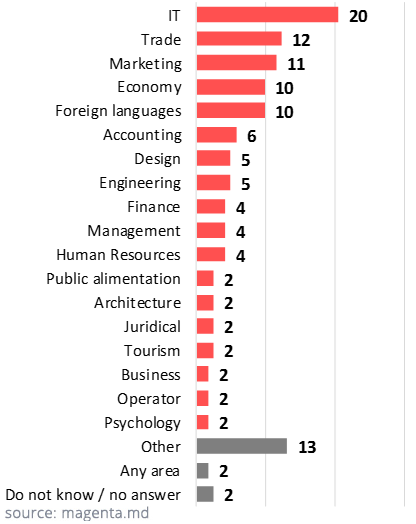 Methodology: The poll was conducted by Magenta Consulting through interviews at the event venue. Of all the visitors, 122 questionnaires were accomplished at the event that took place on 4th and 5th of April 2017, at the Nicolae Sulac National Palace