The disastrous effects of the war between Russia and Ukraine are felt beyond the borders of these countries, but the consequences are largely political, economic, related to the management of the Ukrainian refugee crisis and the management of psychological problems. But Russia is also waging another crucial war, the information war, in which the Republic of Moldova is also involved.

The fake news industry is a key element of Russian strength, without which the support of Russian citizens for the "military operation" in Ukraine would not have been possible. In Moldova, 26% of respondents from the poll conducted during March 3-5, 2022 by Magenta Consulting, said Russia was carrying out a military liberation operation, suggesting that the information machine is achieving its goal.

Although the Moldovan Government is making an effort to calm the country's population by maintaining neutrality and offering unprecedented support to refugees from the neighboring country, Moldovans are also exposed to credible news from the West that state that Moldova could be facing the same fate.

In a new survey, we tried to find out where our citizens get their information about the war in Ukraine.

Since the beginning of the war in Ukraine, 45% of respondents say they have been following the news more frequently than before the conflict. At the same time, 41% said that they watched the news with the same frequency as before or even less frequently.

Since the beginning of the military conflict in Ukraine, how often do you watch or read the news? (one possible answer)

Since the beginning of the military conflict in Ukraine, 1 in 4 respondents claim to have started using new sources of information. 9% state that they started following TV sources, 7% - Telegram, 6% - news websites, which they did not follow before.

What new sources of information have you been using since the beginning of the military conflict in Ukraine? (multiple answers)

Do you usually check the same news in more than one source of information? (one possible answer)

Respondents are reluctant, however, to believe the news that they follow. More than half of respondents (56%) declare that they do not trust them.

How confident are you that the news you are currently watching/ reading is true and not fake? (one possible answer) 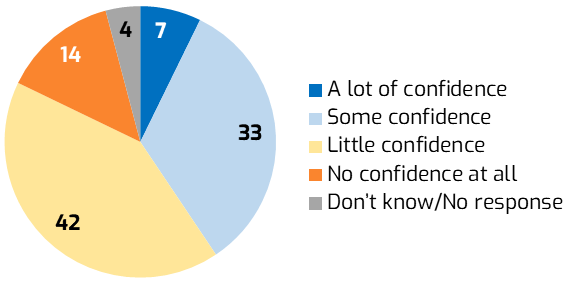 From which countries’ media sources do you get information about the military conflict in Ukraine? (multiple answers)

The Ukrainian refugee crisis has irrevocably demonstrated Moldovan hospitality. Approximately half have in some way helped the Ukrainians who have taken refuge in Moldova. More than a third have helped the refugees with food (36%).

Have you personally or your family helped refugees from Ukraine with... (multiple answers) 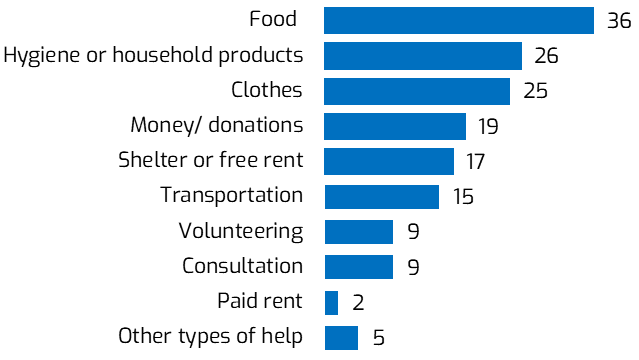 Geography: National study (urban and rural localities on the right bank of the Nistru River)