The number of population, including the young one, in Moldova is dropping. Is the decline in the available workforce  a real phenomenon or a hypothetic one? Who will be working in Moldova in 15 years?  We are inviting you to read the first article from the HR Manager Insights column.

In the last couple of years, Magenta has conducted a series of sociological studies in order to analyze how well trained professionally the workforce is and how satisfied with the available specialists the entrepreneurs are. It is interesting to note the fact that there are actually two parallel realities. According to the first reality, there are no jobs in Moldova, young people have no opportunities of getting hired, and every time they try to get employed they are required to have at least 3 years of professional experience. According to the other reality, which is based on a large number of elaborate interviews with targeted groups and on communication with  groups demanding workforce, there is not enough workforce in Moldova, young people are not really interested in working, and the potential employers travel abroad in search of better wages.

What do young people in Moldova expect from a job?

We could say that things are limited to salaries. It is true that salaries in Moldova are not very attractive, especially considering the fact that  many people hold Romanian passports and thus have access to job offers from Europe and respectively those who hold Moldovan passports have access to job offers from Russia. Nevertheless, Magenta has recently been approached by two international companies who have been in a similar situation; the employers no longer know what terms to offer to the young people in order to have them work for the companies on a permanent basis. Because we, at Magenta, had frequently asked ourselves the same question, we decided to conduct a study regarding the young people, in order to get a deeper understanding of the existing situation. We are going to publish some of this study’s results and we hope that you will find them as interesting as we did.

To begin with,  we would like to present you a short analysis of the actual demographic situation in the country.

How many people live in Moldova, after all?

This questions has at least two answers. According to the NBS data available at the Data Bank, in 2014 (when the last census was conducted), the number of population stands at 3.5 million. This number is based on the 2004 census data, taking into counting the number of deaths and births and the rates of emigration and immigration. This number is rather different when referred to the situation reflected by the 2014 census. Thus, according to the fundamental census estimations, 2,998,235 people live in Moldova. We would like to mention that before stating that NBS doesn’t function well or looking for political excuses, it is important to realize the fact that in Moldova a big part of the population holds Romanian passports and a person can exit the country using either the Moldovan passport or the Romanian one. At the same time, a number of people considered as emigrants, did not drop the citizenship of Moldova and thus are still counted as citizens. There is a number of other aspects and explanations which do not impact the subject of this article.

*The axis placing the intervals was set to present information from 2.5 mln. and above in order to better draw the general tendency and the difference between the 2014 census results and the results of the estimations based on the 2004 census. The line drawn in blue marks the tendency based on the data resulting from the NBS information shown on the web page of the Bank of Data(the information includes the data from 2004, counting the demographic changes according to the information regarding the migration rate, the number of deaths and the number of births). The red line represents the tendency built on the basis of the data of the 2004 census and the 2014 census.

While at the level of the entire population,  a tendency of decline in the total number of citizens can be noticed, when it comes to the young people case, the situation is mainly the same. And again, in 2014, according to the estimations based on the 2014 census, there should be a number of 1.2 mln. of young people aged between 15 and 34 years in the country, whereas the 2014 census counted barely 881 thousand.

It has been found that the majority of young people reside in the rural areas. Nevertheless, as a matter of fact,since a significant number of institutions of higher education are mainly located in urban areas, we can suppose that the situation in the 18-25 years segment is contrary to the official one. If we analyze the structure of population according to gender, we can note that women have a slightly smaller share than men (49%).

Young People, the Distribution according to Age and Area of Living, 2014 Census 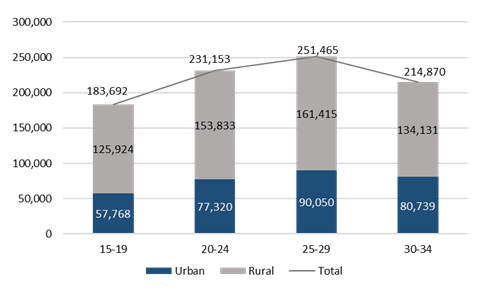 At the end of this article, we would like to mention that a lack of dynamic data is felt and , as we are going to report in our next article, whereas the number of higher education students has decreased significantly, it is still not clear what are other reasons that could impact the phenomenon besides the demographic tendencies which, according to the data concerning the dynamics of the number of young people, are not that significant.

On the 10th of October, read on consulting.md our next article about what young people in Moldova tend to study and what are the most popular professional fields they choose nowadays.

The source of data:all the graphs shown in this article were made by the article’s authors, on the basis of the data taken from the website of the National Bureau of Statistics (Statistic Data Bank Section and Census Section).